The documentary film “La Frontera” chronicles Mark Hainds 2014 extraordinary journey alone, and on foot, along the Mexico American border.  Joe Vincenza tells us more about the movie, and the man.

The Mexico America border has been of particular attention lately, as an issue in the 2016 presidential election.  But for Mark Hainds, the subject of the documentary film “La Frontera”, his fascination with the border began long before the election.

“It’s always been works of literature, it seems like, that inspired me to go somewhere. I had started reading Cormac McCarthy, all of his books: “No Country For Old Men” and “All The Pretty Horses” they’re set along the border, along the Texas-Mexico border in particular and I decided not just to take some time off but to resign my position. I wanted to see those areas, I was really captivated by what I was reading about them but I also looked at cell phone coverage…I wanted to really really get away. And I wanted to do something that I thought no one had done before: walk the length of the U.S.-Mexico border.

And so he did, for over a 1,000 miles, and 7 weeks, being filmed along the way.  Because of movies and TV, everyone thinks they know what happens along the border, but Mark says, it’s not really like we think it is.

"The largest misconceptions are that we’re not enforcing the border and that border traffic is increasing and it’ the exact opposite. I stayed in houses with retired border patrol agents out there and they cannot believe how many new border patrol agents there are. They’re building new buildings just ramping up the number of agents, it’s very difficult to sneak past them. It’s still happening but the overall migration numbers are going down very significantly from where they were a decade ago.”

A fair question at this point might be, what would prompt someone to quit their job and walk for 7 weeks in areas that were potentially very dangerous. Again Mark Hainds,

“I wanted to see some really remote areas, I wanted to challenge myself- selfish reasons- and then I thought maybe we were not getting a good picture of what was actually happening along the border with the immigration and the drugs and how our militarization of the border was effecting those people. I wanted to experience that in person."

Now he lives in Andalusia with his wife, their two kids, and, like any good farm, a few dogs. You might have even met Mark at the Palafox Market where he has a booth selling specialty wood chips and extraordinary mushrooms.

The film “La Frontera” which chronicles his walk and how it intersects with all the issues that the border represents will air on WSRE Nov 3. You can meet Mark, and see a special screening of the film Thursday October 27 presented by WUWF at Constant Coffee & Tea.  Too rsvp, click HERE. 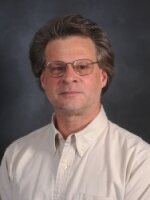 Joe Vincenza
Joe Vincenza has been working in public radio since 1984, doing any number of jobs at a variety of stations around the country. As Program Director at WUWF, a position he's held since arriving in Pensacola in 2000, his job now focuses on making sure the station sounds as good as it can, both in content and in technical quality. He's also the guy listeners should talk to when there is something they don't like, or something they do. Contact: 850.473.7451 or joe@wuwf.org.
See stories by Joe Vincenza
Related Content