Brad Barr drifted over the border to Canada as a young man and became a fixture on the Montreal indie rock scene. Together with his sibling Andrew, he formed the popular Barr Brothers, concentrating on alt-folk. As a solo performer, Brad does some pretty amazing things (check out the video) and we'll hear some of his latest work on a new solo acoustic album, The Winter Mission (2022 Secret City Records). Also, we'll have an incredible interview and performance from Gretchen Peters.

Playlist Available after Broadcast on February 6, 2022 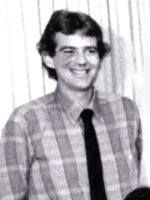 John Macdonell
John began his career in radio at the age of 14 when he took over a weekend disc jockey shift at a local AM station. He continued working in commercial radio until he returned to the Pensacola area and began working at WUWF.
See stories by John Macdonell