Some Towns Treat Bikes As Trendy, But In Reading, Pa., They're Tools

He can't afford a car — he just got out of prison. He's living in a halfway house and finding temporary automotive work around the city.

Getting around by bike in Reading is now a bit easier than it used to be. The city is making an effort to become bike-friendly as a way to cater to existing residents — many of whom, like Walker, bike because they have to.

The unemployment rate in Reading is 8.2 percent, more than three percentage points higher than the national average. About 14 percent of workers don't have a car.

"Reading's poor, and a lot of the people who live here are poor, so riding a bike is how they get from place to place," says Dani Motze from ReDesign Reading, a nonprofit group that's trying to revitalize the city.

It's hard to say exactly how many people in Reading bike. According to Census data, only about half a percent of the city's workers commute by bicycle, while in other U.S. cities known for biking, it can be more like 6 percent or 7 percent. But a lot of people in Reading don't work.

What is clear is that biking in Reading isn't easy. The city has no bike lanes, signs or street markings. Walker says that can make riding feel dangerous.

"You're riding, [and] there's always an expectation that something may happen," Walkers says. "I hear a screeching of tires or a sudden acceleration sometimes, I'll be on my toes."

A few years ago, when Craig Peiffer became Reading's zoning administrator, he was shocked that the city was so far behind other municipalities when it came to support for biking.

"As a planner here in Pennsylvania, I've seen smaller towns — significantly smaller towns — where they were already putting in designated bike lanes," he says. "It was frustrating, quite frankly."

Peiffer and a colleague decided to take action. Their goal: make Reading a safer, cheaper and more convenient place to bike.

That started with Reading's first bike shop, which sells used bikes and affordable parts. Russell Eckert is a volunteer.

"There's a lot of people in the city that can't afford to go buy a new bike, and they come in here and buy the bikes from us," he says.

"If were to go buy the tool, I'd have to go to Sears, and it'd probably cost upwards of $20 just for this one wrench," Walker says.

After the bike shop, the city launched a bike-share program and installed a repair station downtown. The local transportation authority also added bike racks to all of its buses.

Now, Reading's getting grant money to paint white arrows for bikes on the street in a section of the city. And it's eyeing other streets for bike lanes.

Peiffer says all these efforts are meant to help Reading's residents.

"Where we're seeing the largest number of cyclists are the people that live here, so that's first and foremost," he says.

This is a different way of looking at biking, compared to other cities, which often use biking amenities to attract outsiders — particularly affluent millennials, sustainability advocates, and pro cyclists.

"Other cities have used biking because biking is cool and hip — and that's fine, there's nothing wrong with that," says Brian Kelly, executive director of ReDesign Reading.

But in Reading, it's just not the point.

Marielle Segarra is a reporter for Keystone Crossroads, a statewide public media initiative reporting on the challenges facing Pennsylvania cities. 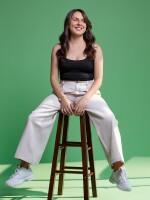 Marielle Segarra
Marielle Segarra is a reporter and the host of NPR's Life Kit, the award-winning podcast and radio show that shares trustworthy, nonjudgmental tips that help listeners navigate their lives.