OK, here's one last deflate-gate joke - in Boston today, Patriots fans were pumped up. That's all we'll say. The team took a victory spin through the city's downtown to celebrate a fourth Super Bowl title, this one over the Seattle Seahawks. Fred Bever of member station WBUR was there.

FRED BEVER, BYLINE: Despite the record-breaking snows from two storms that walloped the city and for a while paralyzed roads and public transit, the parade route was clear and crowded.

A musket brigade in Minuteman garb led the procession of duck boats and flatbed trucks from the city's Prudential Center across the Boston Marathon finish line and on to City Hall. They carried players, cheerleaders, team owner Robert Kraft with the Lombardi trophy raised triumphantly over his head. Coach Bill Belichick came through, and wide receiver Julian Edelman stripped to a T-shirt while surfing the top of a truck cab. And quarterback Tom Brady, who earned his fourth Super Bowl ring on Sunday, kept his young son on his lap.

BEVER: Fans traveled here from all the New England states and beyond. Venezuela native Geraldo Giusti used to live in Boston. He was here in 1996, the year the Patriots lost the Super Bowl to the Green Bay Packers. He says he was so excited by this year's win, he had to be here.

GERALDO GIUSTI: I am. I live in LA now, and I came all the way from there to watch the Super Bowl here and come to the parade.

BEVER: And if there was any taint to the victory in the aftermath of the deflate-gate allegations about ball tampering in the Patriots' win over the Indianapolis Colts, you couldn't find a hint of it in the proud streets of Boston. Azeb Hishe and Angelica Laing took the day off to join the joyful chaos. Hishe chalked up the controversy to jealousy.

AZEB HISHE: When you have a good football team - we used to have a good basketball team - a good baseball team and a good hockey team. People are looking for an excuse to bring our city down. That's just it. Best city in the world. 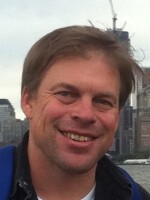 Fred Bever
Fred Bever joins NHPR with an extensive reporting background for public radio and other media. Bever has provided live and taped content for NPR, the BBC, WBUR in Boston and New England Public Radio. His most prominent work was his live on-scene coverage of the hunt for the Boston Marathon bombing suspects and its aftermath.
See stories by Fred Bever